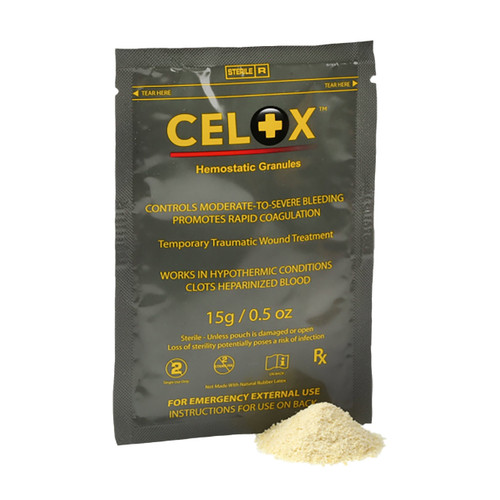 Celox™ can stop even potentially lethal bleeding fast. It is easy to use (just pour, pack and apply pressure), very safe (tested to class 3 CE Mark standards) and extremely effective. When mixed with blood, Celox™ forms a robust gel-like clot in 30 seconds. It works independently of the body’s normal clotting processes. Celox’s™ clotting ability has been proven to work in the cold (hypothermia) or in the presence of common anti-coagulants such as warfarin. It generates no heat and will not burn the casualty or care giver. In pre-clinical tests by the US Navy, Celox™ was the only product to give 100% survival. It gave a strong stable MAP (mean arterial blood pressure) and was also the only product to give robust clotting with no re-bleeding*. Celox’s™ safety has been tested to the intense class 3 CE mark standards. Celox™ is made with chitosan. Chitosan is made up of compounds of glucosamine, a sugar that is normally found in the body. Celox™ does NOT use non-degrading procoagulant minerals or nano particles such as smectite or kaolin, which will remain in the body indefinitely unless completely removed.

The chitosan in Celox™ is a specific high quality grade selected for medical use from a shellfish source. Chitosan is made up of glucosamine and N-acetyl glucosamine, which are naturally occurring sugars in the body. The chitosan in Celox™ RAPID is free from animal proteins that would be the cause of any allergic response. It has been tested for allergenic reaction on humans with a known fish or shrimp hypersensitivity and none of the subjects showed any skin reaction to the chitosan(1). These products have been through extensive safety and biocompatibility testing to the ISO 10993 standards, the FDA device requirements, and the most stringent class of European Medical Device regulations. Because Celox™ RAPID works independently of the body’s clotting cascade it only works where it directly touches the blood. It does not set off any thrombotic chain reaction elsewhere that could lead to increased risk of blood clots. The glucosamine and N-acetyl glucosamine sugars in the chitosan are naturally occurring materials and the body has known metabolic pathways to break down and excrete them(2). This is unlike other hemostats that can leave mineral residuals in the body(3)(4). Celox™ has had thousands of successful uses since first launched in 2006 with no adverse events reported.