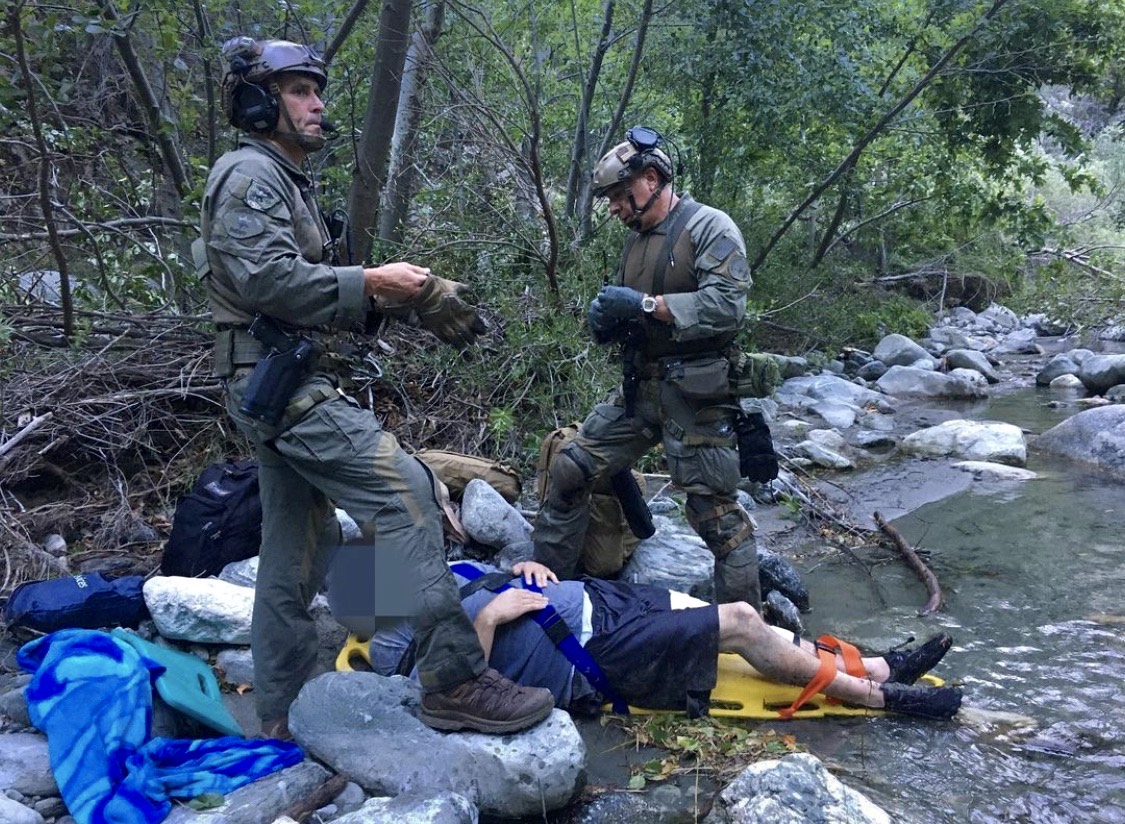 Paramedics apply the STS-C to a patient in a remote area of the Angeles National Forest before he was airlifted to a trauma center. Photo by Steve Doucette of the Los Angeles County Sheriff's Department.

The call came into the Los Angeles County Sheriff’s Department in May from the Angeles National Forest. A hiker had taken a fall and suffered a closed femur fracture to the left thigh. Deputy sheriffs assigned to the department’s Emergency Services Detail/Special Enforcement Bureau were airlifted into the remote location and hoisted down to where the patient lay along a rocky stream.

The deputies carried with them the lightweight Slishman Traction Splint Compact (STS-C) from Rescue Essentials. After applying the STS-C and packaging the patient for transport, the deputies carried him to a suitable hoist location where he was airlifted to a trauma center.

Steve Doucette, a deputy assigned to the detail, said his department has had several uses for the original Slishman Traction Splint in the county’s challenging environments. “The STS-C and STS, in general, excel in these operations due to being compact, lightweight, easy to apply, and very compatible in casualty extraction with various litter/hoist systems we use,” Doucette said.

The STS-C has racked up several honors this year—selected as a Hot Product at the EMS Today Conference & Exposition, held in early March in Tampa, FL. More recently it received an EMS World Innovation Award at the virtual EMS World Expo in September. The EMS World judges noted that splint "would be very beneficial for backcountry or ski patrol applications."

A better way to stretch a leg

The STS-C story began in 1998 at the University of New Mexico, where Dr. Sam Slishman was a resident in emergency medicine. “I saw a traction splint that just seemed absurdly bulky and cumbersome,” Slishman said, “and I thought surely there was a better way to stretch a leg.”

So, he built a prototype splint that worked to some extent and handed the idea to the Science and Technology Corporation of UNM, which patented the idea. “I tried for a few years to bring a ski pole/hike pole version to market from roughly 2002 to 2005,” Slishman said. “It didn't go far. I then cut it down to be more EMS specific. It continued to go pretty much nowhere for a few more years.”

A late 2008 email from a man in Singapore who saw the splint on Slishman’s website generated some interest in the EMS version from the Singapore Army. About a month later I was in Singapore and a few months after that they ordered 1,300. Slishman’s Singapore connection didn’t generate much interest beyond the initial order

That’s where Phil Carey of Rescue Essentials comes into the picture. In 2011, Carey licensed the patent to bring the splint to the United States. “It was greatly refined over the next few years,” Slishman said. “In 2014 we decided to trim the product even further, essentially to be the size of the Kendrick Traction Device. After many twists and turns we finally arrived at the STS-C.”

Time for an upgrade

Richard Bilger, wholesale product specialist with Rescue Essentials, describes the STS-C as “evolutionary.” “I’ve been in this business now 32 years and I have to say this is the most evolutionary change of a product that I think I’ve ever seen in all those years,” Bilger said.

The traction splint itself “is a product that hasn’t evolved really significantly since World War I,” he said. “Since World War I, we’ve been pulling traction from the bottom of the foot. That means that every single device that’s ever been manufactured for traction has a mechanism that extends beyond the foot.”

That bit of hardware extending beyond the bottom of the foot gets banged into and closed in ambulance doors, and sometimes forces paramedics and rescuers to come up with not ideal solutions when transporting too-tall patients, Bilger said.

The original Slishman Traction Splint’s simplified design cut the time required to apply the device and allowed medics to push traction from the ankle, something no other traction device did at the time, he said. The STS-C took that advancement a step farther. “It allows us to come up to the knee,” Bilger said. “It allows us to bring that ankle strap up proximal to the calf muscle or proximal to the patella, which means that if I have a lower-leg injury, a tibia/fibula fracture or an amputation, I can still get traction on that femur and provide pain relief for that patient.”

Because the STS-C allows for traction to be applied from the knee, it can double as a pediatric traction device, Bilger said. It also allows paramedics to adjust traction without leaving their seats at the head of the patient, he said.

The extremely compact and lightweight STS-C is designed for situations where medical equipment must be packed into difficult or remote locations. It is ideally suited for search and rescue, special operations, military medics, wildland firefighters, backcountry skiers, or anyone trying to minimize pack weight and cube space.