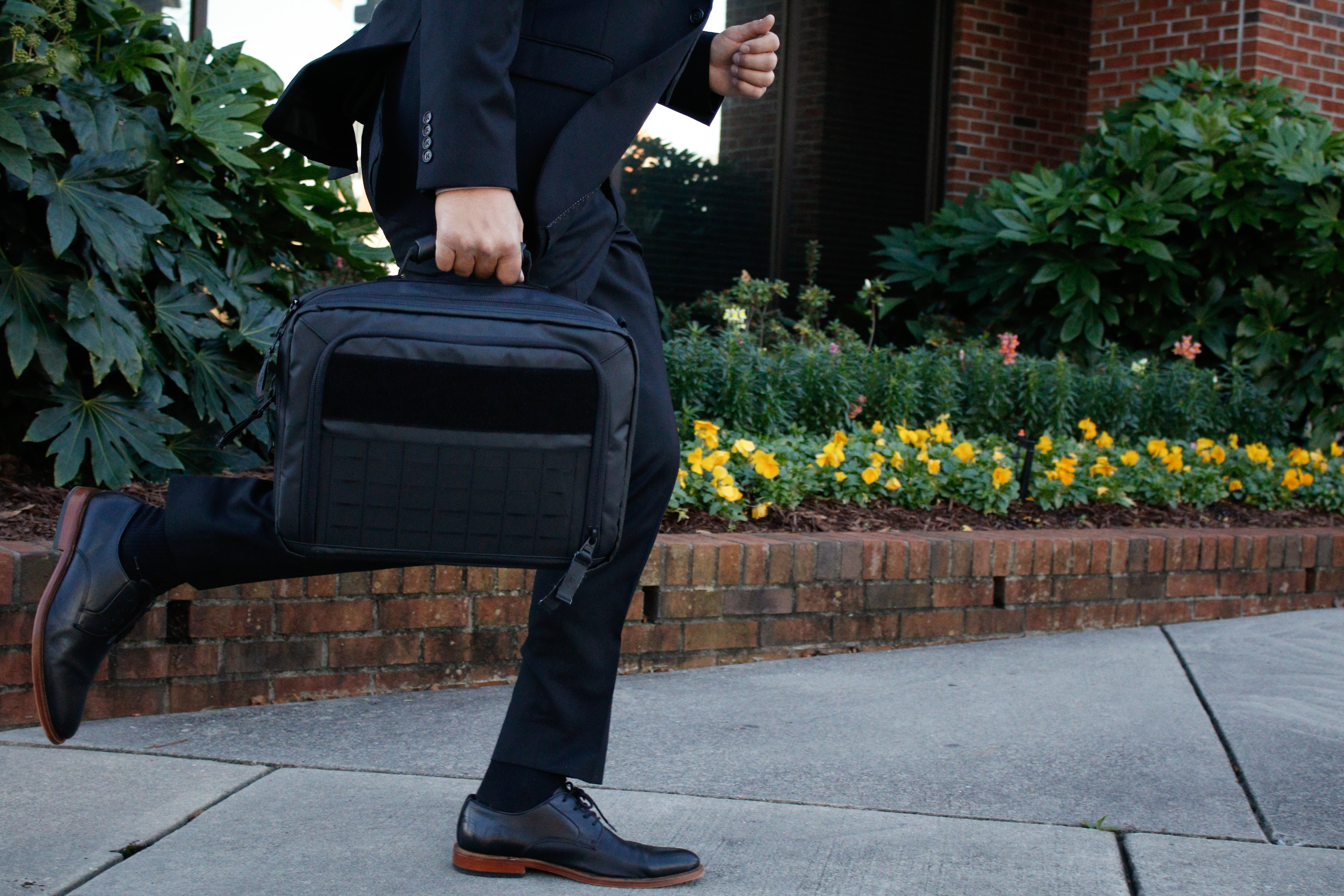 Executive protection professionals must blend in while being at the ready, whether in the boardroom or on the go.

Part of their image is professional attire -- business suits or whatever clothing is appropriate for the client’s current situation. While they often carry weapons and other tools of the protection trade beneath those facades, they also must be equipped to handle medical emergencies.

To better serve those in the field, Rescue Essentials launched its Executive Protection series, adding to its comprehensive line of medical and rescue products.

Nick Disparti, program manager for federal and defense markets with Rescue Essentials, said the company has a background in building executive protection kits.

“We build many medical kits for the US Secret Service,” Disparti said. The company also works with large foundations and corporate entities to put together custom executive protection medical kits.

“We have a history of designing kits for plain clothes detectives and postal inspectors, non-uniform personnel wearing a business suit or street clothes who need to carry medical covertly” he said.

The Rescue Essentials Executive Protection series is designed for non-uniformed personnel operating in a business environment, who need to either carry medical on their person or in a bag, but in a way that’s not obvious.

“How can I carry medical in my business suit without it being obvious that it’s there?” Disparti said. “Is there a way for me to carry medical in the lapel pocket of my jacket? On my belt, or on my ankle? How do I carry a medical bag into a corporate office, without looking like I just jumped out of an ambulance or drawing a lot of attention.”

Executive protection professionals are concerned with their protectees suffering the same types of injuries that law enforcement or emergency medical services would respond to, Disparti said.

“That may be severe bleeding control if it was a gunshot wound or a knife injury,” he said. “But it also might be basic first aid to support the health and welfare of their protectees. Some protectee-specific components might also need to go in the executive protection kit. For instance, I might carry EpiPens if my protectee has severe allergies, or I might carry a glucometer and glucose if I knew that they were diabetic.”

While the medical gear executive protection professionals carry is similar to an EMT’s, it must be carried in a more covert and unobtrusive manner.

“For instance, the new Executive Protection Kit (31-0425) was built into a bag that looks on the outside like a 15-inch laptop bag you would see in any corporate office,” he said. “You could carry that into a business meeting, and no one would look twice at it. On the inside it’s a full basic life support EMT kit with all the supplies you need but not something that anyone would ever even think is a medical kit.”

“That’s really the core to executive protection,” he said. “You’re looking at someone standing there in a business suit and what you don’t know is that person has three weapons on them, two first aid kits, a cell phone and a radio. But they look exactly like a corporate executive walking into the office.” 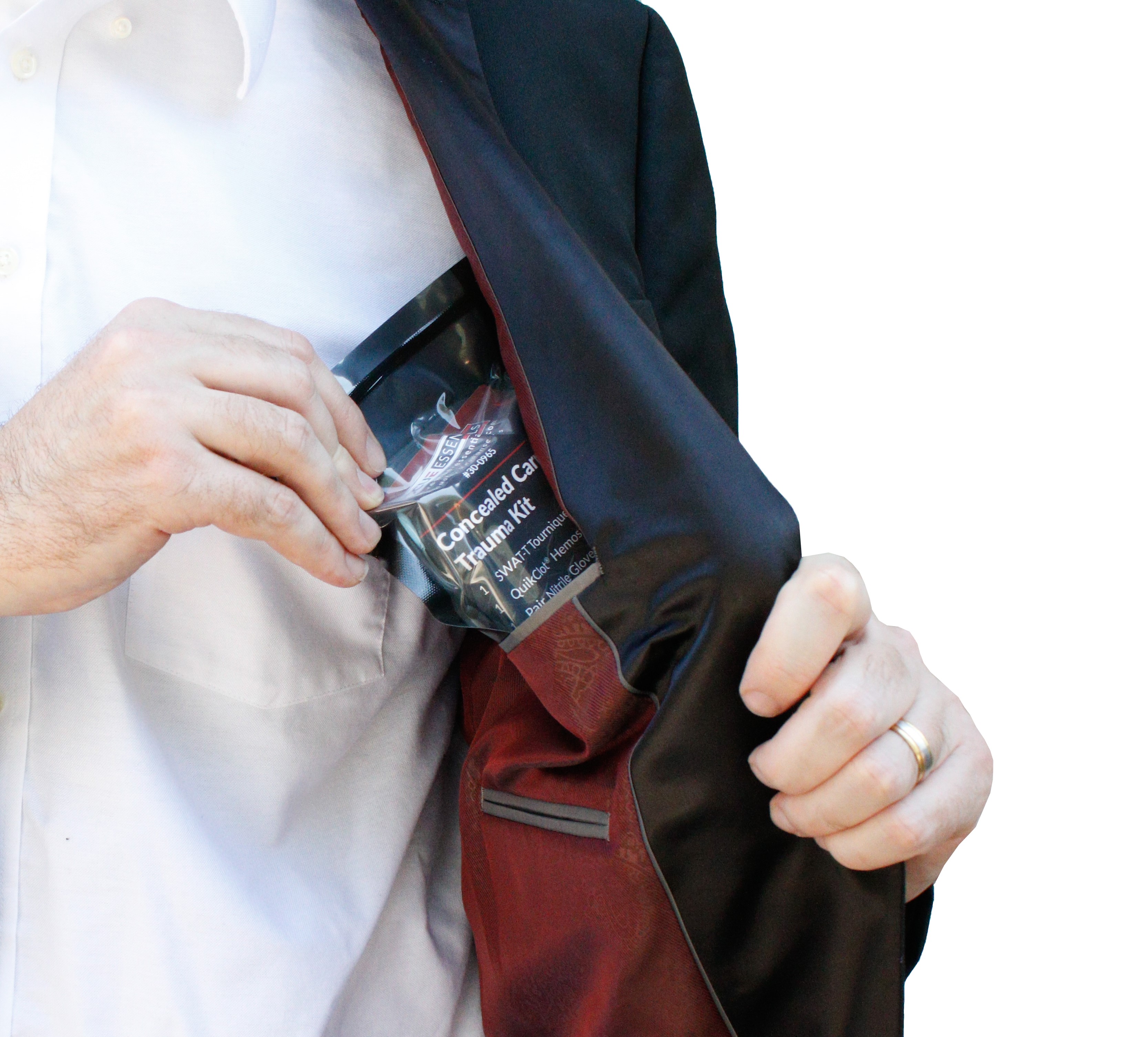 Rescue Essentials has a pocket-sized Concealed Carry Trauma Kit (30-0975) that holds a tourniquet and a bleeding control dressing that can slide into the lapel pocket of some suit jackets, Disparti said. Another small pouch, the Covert Carry Advanced Trauma Kit (30-0948), is designed to fit on a standard business suit belt.

“But when I put a jacket over it you can’t see it,” he said. “It’s thin and it’s not bulky. It’s black so it blends in with everything. No one can really tell I’m even carrying it on me.”

“The FAT Kit is the top of the line for the executive protection team. It’s a large kit, containing the supplies they need to fully support their protectees until they can deliver them to definitive care.”

Rescue Essentials' Flat IFAK is another versatile option for concealed carry and covert carry scenarios. The kit can be MOLLE-mounted in a variety of locations or worn on a belt and concealed under a jacket. It also can be combined with the MOLLEHead Vehicle Mount (70-0593) to provide rapid access and low-profile storage.

Corporate protection teams traveling with executives must have various levels of equipment as they move throughout their environment, whether that’s in cars, in planes, on foot or in the office.

“Your bulky equipment that’s going to be in a vehicle can’t necessarily go in the plane or into the business meeting,” he said. “It’s a system of breaking things out into stages so that no matter where you are you have some level of medical response on you.”

Nick Disparti served as an emergency room technician and EMT while in the Coast Guard. After leaving the military, he earned a bachelor’s degree in biology. After 22 years in the medical device industry, Disparti revisited his emergency medical roots at Rescue Essentials where he works in sales and kit development.