“The striking feature was to see healthy young Americans with a single injury of the distal extremity arrive at the magnificently equipped field hospital, usually within hours, but dead on arrival.”


It could be said that the above quote was the first seed planted from which the “Stop the Bleed” initiative eventually grew, spoken almost a half century ago in the heat of the Vietnam war. The trend described in that quote continued for decades and deaths from extremity wounds persisted through American deployments to Iraq and Afghanistan. A real turning point was the publication of a Naval Special Warfare and USSOCOM Medical Research & Development initiative called Tactical Combat Casualty Care, or TCCC. Prior to that publication, US military combat medics treated the injured on the battlefield in conformance with the concepts of Advanced Trauma Life Support (ATLS), a standardized approach to trauma care that is still a standard of care for in-hospital trauma management. The shortcomings of that approach as applied in battlefield conditions were becoming ever more apparent.

By 2001, the TCCC approach had gained significant statistical support, and in the interest of advancing its acceptance and implementation, the Committee on Tactical Combat Casualty Care (Co-TCCC) was formed. Ever since, that committee has been fulfilling the role for which it was created:

By 2004, data emerging from Iraq and Afghanistan was showing that the increased use of tourniquets was saving more lives. The data was so convincing that the Army announced an effort to equip every soldier in the field with a tourniquet. This represented a significant change, as soldiers had been trained for years that tourniquets were a last resort, could be dangerous and were likely to lead to amputation. In fact, the apparent result of the wide deployment of tourniquets in Iraq was a dramatic reduction in deaths from extremity bleeding—estimates ran as high as 85% reduction in preventable deaths from that cause.

These startling TCCC findings quickly made their way to the National Association of Emergency Medical Technicians (NAEMT), and the use of tourniquets was fast becoming an accepted first treatment in cases of severe extremity bleeding in the civilian sector. In 2011, NAEMT’s Tactical Emergency Casualty Care (C-TECC) was convened to adapt TCCC means and methods to civilian tactical settings where battlefield procedures were not always applicable or effective. Of course the use of tourniquets figured prominently in TECC training.

In April 2013, The Joint Committee to Create a National Policy to Enhance Survivability from Intentional Mass Casualty and Active Shooter Events was convened by the American College of Surgeons (ACS). Working with the medical community and representatives from the federal government, the U.S. military, the FBI, and other governmental and nongovernmental emergency medical response organizations, the Committee began creating a protocol for national policy to enhance survivability from active shooter and intentional mass casualty events. That committee’s recommendations are called the Hartford Consensus, and has been updated with four reports as of today (3/2019).

All the programs above led up to October 2015 when the Obama Administration created the initiative known as Stop the Bleed. It was realized that some of the key bleeding control techniques that were being taught in TECC and recommended by the Hartford Consensus, could be easily taught to civilian laypersons, enabling ordinary citizens to deal with life-threatening bleeding injuries if they were to find themselves at the scene of such an injury. Stop The Bleed (STB) created a call to action at the grassroots level, intended to encourage and empower the general public to intervene at the scene of a traumatic bleeding injury.

Since the inception of the Stop the Bleed initiative, hundreds of thousands of non-medically trained laypersons have taken short courses in bleeding control. The initiative now functions under the auspices of DHS, and is supported by ACS and their bleedingcontrol.org website, NAEMT and numerous other entities that offer training courses to the public.

Stop the Bleed kits, aka bleeding control or B-CON kits, are becoming common in public spaces. They are found in schools, airports, public libraries, virtually anywhere AED cabinets are found. These kits are generally simple and straightforward, and are often configured with items that even a completely untrained person might be able to use effectively in an emergency. The kit shown below contains the most-often included items—a windlass tourniquet, lots of gauze, a good pressure dressing, shears, gloves and a sharpie for recording critical information. 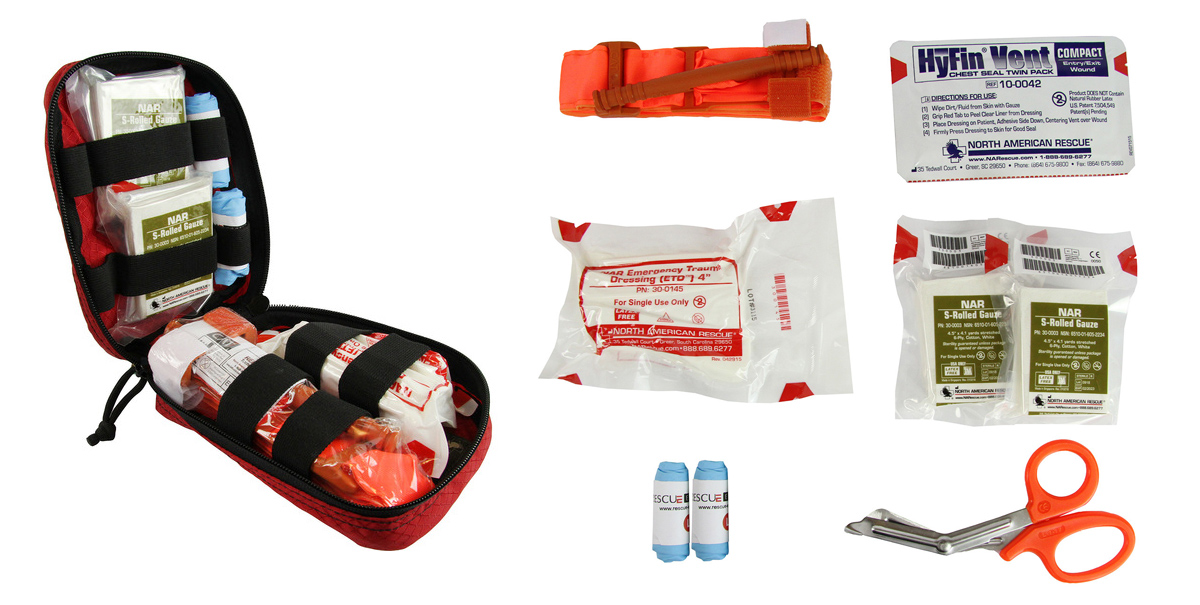 Types of windlass tourniquets include the North American Rescue Combat Application Tourniquet or C-A-T, the SOFTT-W from Tactical Medical Solutions and the SAM XT, made by SAM Medical. All of these have a similar principle of operation. Slightly different training is required with each of them to apply them quickly and effectively. The training for each of them takes mere minutes, and is designed to save seconds when seconds really count. They are all extremely effective when correctly applied, and can be applied to oneself using one hand if need be. Sometimes another option, such as the SWAT-T from H&H Medical (which doubles as a compression bandage) may be selected. The SWAT-T is less intimidating and more intuitive for untrained laypersons than the windlass tourniquets, but more difficult to apply with one hand.

There are also tourniquets that are simple rubber ropes with metal clasps, tourniquets with ratchets, and more. All of them can be effective when used by a trained responder, but the options specified above are the most common choices of entities electing to place public access bleeding control kits. The other must-have item in a bleeding control kit is gauze—the more the better. Compressed gauze is far less space intensive than regular gauze, so it is the usual choice for small kits where space is a concern. It is used for wound packing, in conjunction with manual pressure or a pressure bandage to control thoracic or other bleeding where tourniquets are not an option.

Bleeding control classes teach wound packing using lifelike training devices that can simulate tissue, bone and blood flow. Those aids are a great benefit, as the techniques involved are best learned with hands-on practice that develops muscle memory. Once learned, almost any absorbent material can be used to pack a severely bleeding wound, even a t-shirt, but obviously sterile gauze is preferred if available.

Where cost is not a barrier, including a hemostatic gauze such as Celox or QuikClot can reduce the time that manual pressure is required to stop the bleeding, as these agents greatly accelerate the clotting process. They can do this either by speeding up the natural clotting process or by electrostatically binding to red blood cells and absorbing moisture. While these products make a good addition to any Stop the Bleed kit, they are more commonly found in major trauma kits that are carried by responders such as Tactical Medics, Rescue Task Force operators and others treating injuries in hot zones where there may be multiple casualties and exposure to hostile fire. The use of hemostatic agents in these situations can significantly reduce the time needed to stabilize a patient, enabling the responder to treat more of the injured and lowering their own exposure to present dangers.

A personal kit for controlling bleeding can be as simple or as elaborate as the individual demands. But it is only useful if it is available at the point of injury, which is why the Stop the Bleed initiative has caused such a proliferation of small, simple kits in public places.

Given the availability of the common materials contained in a typical STB kit, the other major variable is the training of the person using it. Stop the Bleed is an effective initiative, in large part because the actions for which it calls involve very easily administered instruction. With only a few hours of training, a person can become many times more effective in an emergency. For assistance finding a qualified Stop the Bleed or TCCC instructor, view the training and instructor locator on rescue-essentials.com.