5% of all Rescue Essentials brand sales will be donated to support the Ukrainian people (through May 26). 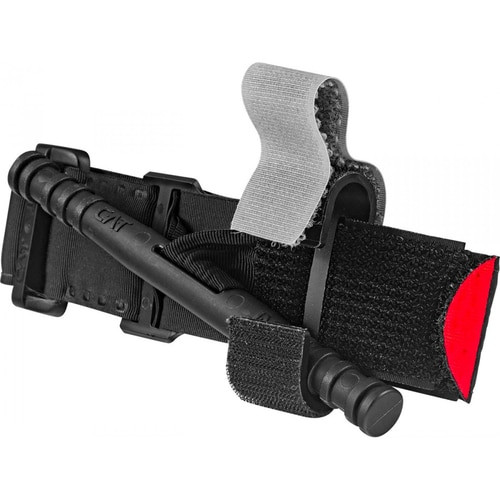 **SPECIAL PROMOTION! Add a Universal Tourniquet Holder and a CAT tourniquet to your cart and save $6.48 on the holder!

The Combat Application Tourniquet®, introduced to U.S. Army in 2005 is a true one-handed tourniquet, widely credited with decreasing mortality rates due to extremity exsanguination by 85%. After an exhaustive study, the U.S. Army Institute of Research deemed it to be 100% effective.

The manufacturer, CAT Resources has developed the new CAT GEN7. Following extensive field reviews, the CAT GEN7 has been completely re-designed, making it the most effective Combat Application Tourniquet to date. The new CAT GEN7 is simpler to use thanks to a single application protocol, single buckle routing system and further improvements to its components and construction.

Proven to be 100% effective in occluding blood flow in both upper & lower extremities by the U.S. Army's Institute of Surgical Research

The Combat Application Tourniquet was first fielded by USSOCOM in 2004 and by conventional forces in 2005. In the early years of the Global War on Terrorism (GWOT) and prior to the implementation of modern prefabricated tourniquets, the death rate from extremity exsanguination ("bleeding out") was calculated at 23.3 deaths annually. After full implementation of the CAT Tourniquet, this number was reduced to 3.5 deaths per year. This represents an astounding 85% decrease in mortality. In 2005 the Combat Application Tourniquet was selected as one of the Army’s top 10 greatest inventions and is recognized as one of the foremost advancements in pre-hospital care during the GWOT with an estimated 1,850 lives saved.

Ongoing thorough analysis of all deaths from extremity hemorrhage has produced evidence-based tourniquet improvements. This approach yields critical device improvements, including five refinements in the design of the Combat Application Tourniquet over the last decade. These enhancements focus on maximizing the effectiveness of the device while minimizing morbidity.

Continuous interface with end-users and researchers, literature review and tourniquet applications in both real world and simulated high stress tactical environments, have made it clear that despite tremendous success, tourniquet knowledge gaps exist in the following areas:
(1) single verses double routing of the band, and
(2) Importance of slack removal prior to engaging the windlass. Closing these gaps will be accomplished through device enhancements, knowledge products and focused training.

The patented Combat Application Tourniquet (C-A-T) featuring the proprietary red tip design and the mechanical advantage of a band within a band has been the Official Tourniquet of the U.S. Army since 2005. The innovations in the C-A-T are protected by U.S. Patent Nos. 7,842,067 and 7,892,253.